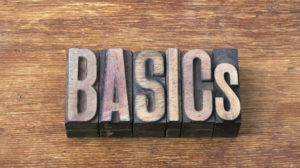 In this episode on Five Tips for Beginning Preppers

Is your preparedness causing you to feel overwhelmed? If so, it is essential to know that you are not alone in how you feel. Many people, especially when they first begin to focus on their preparedness feel overwhelmed and as if they are emotionally drowning. After all, it's a lot to take in, and it's completely normal to feel like you're in over your head.

mindset, they can be overcome by the dangers that they think are around every corner. The problem is that before opening their eyes to preparedness, people often have normalcy bias. Either that or they've just never thought about the dangers of the world. Then, once their eyes are open and they begin to prepare, they become aware of all the potential tragedies waiting for them. It's at this point that the overwhelm often sets in.

Fortunately, the odds of most of the tragic events ever happening is minimal. Therefore, the urgency to become prepared may not be as urgent as it initially seems. One way to overcome the feeling of urgency is to take a measured and logical approach to your preparedness. One way to do that is by working with the five tips for beginning preppers. By doing so, the five tips for beginning preppers will help guide and reassure you that you're on the right track and probably doing better than you think.

While we're on that point, it's important to know that more often than not, people are more prepared than they think. Heck, many times people who are new to prepping, are not new to it. They, in reality, have a subconscious that has caused them to prepare without them knowing they are doing it. That is why, when they move to the next tip in the five tips for beginning preppers, inventorying and organizing their supplies and resources, they are often surprised about how far ahead of the preparedness game they are.

Regardless of where you are in that equation though, it's good to understand that by just taking that initial leap forward and making the conscious decision to prepare, you are on the right track. Heck, you are probably more than on the right track. The fact is that by just admitting you need to prepare, you are light years ahead of most other people who never accept they should take the time to improve their readiness.

Inventory and organize your supplies and resources

Inventorying and organizing your preparedness supplies and resources is a great way to help you establish a solid prepping foundation. Just like a home, one key to preparedness is a solid foundation. In this case, building a solid foundation the five tips for beginning preppers will help you overcome one of the most significant prepping challenges. That challenge is a shortage of time. The majority of preparedness frustration centers around a lack of time and money. Therefore, it's essential to establish an accurate inventory so that later, as you work on your preparedness, you know what you have and where. This will go a long way to helping you be more efficient with your time.

About money, knowing what you have on hand is extremely important. Far too often, preppers make the mistake of purchasing, acquiring, etc., gear, supplies and other items that they already have. What's the reason for this? The idea is that many people are unaware of what they have and how much they have of it. By completing a substantial inventory, preppers will find that they save more money than those who don't act in a purposeful when preparing.

Knowing what you have on hand will help you plan better when the time comes. That's because if you sit down to plan, only to be interrupted by the need to research your supplies, you may find yourself with a less than desirable plan. When it comes to planning, the best course of action is to sit down and focus on the plan. When you do, you'll most likely do a better job than if you were distracted while working on the plan.

Perhaps the best way to determine what you need to prepare for is by conducting an individual risk assessment. Realistically establishing what your most significant threats are, provides you with the opportunity to manage your most significant risks first. When you prioritize your risks, you are setting yourself up for success should an event occur. When people fail to prioritize, they may find themselves addressing problems that don't exist or are so inconsequential that solving them is a waste of time and resources.

When conducting a risk assessment, two of the most significant factors to consider are probability and impact. Probability is the potential of an event happening. Some events have a low chance of occurring, while others have a higher likelihood depending on your area. Impact refers to how severe the resulting problems will be for you should an event happen. For example, the impact of a fire may be extremely high due to the potential to lose your home, goods, and family as a result. Likewise, a fractured toe is not likely to have a significant impact on your life.

One area that often goes overlooked when preparing is what happens when you are away from home. We are all probably fairly good at thinking through and preparing for emergencies when we're home. However, what happens if a significant earthquake occurs and you're 50 miles from home? Have you performed risk assessments on various aspects of your time when out and about?

As Ted Runci spoke about in episode four, before planning, it's essential to get all the information together that you need to prepare the plan. If you don't, as mentioned before, you may find yourself with a lower quality plan. By preparing in advance to create your plan, you'll be set to know the information needed, which will allow you to focus on planning.

When planning, you'll want to determine what your priorities are. Prioritizing aspects of your plan make it possible for you to address the most critical elements first. Often, some portions of your plan experience delay until others are complete. It's times such as these that prioritizing your plan in advance will help you to overcome issues in advance.

Create courses of action to follow that will allow you to execute the plan as smoothly and efficiently as possible. Knowing what steps to take in advance as a response to various problems will pay dividends when an emergency happens. It's when we don't think through potential courses of action ahead of time that we set ourselves up for failure. SO, make sure you plan accordingly and think things through before they happen.

As you work through your preparations, you should do so in a systematic way that addresses all of your needs equally. For example, having three months of food, but no plan for water doesn't do you much good. In other words, as you prepare your food supplies, also prepare your water, medical supplies, etc., evenly so that you are ready if the time comes.

Slow and steady wins the race. When you prepare, you want to make sure you take action in a sustained and logical manner. Remember all of the planning we went over earlier? Well, stick to your plan and as you go through your plan reassess what you're doing. Set yourself with near and far goals and work towards achieving them. It's always good to remember, doing a little bit each day results in significant accomplishments over time.

Don’t panic and try to do everything at once. As we discussed at the beginning, new preppers are often overwhelmed and some panic when thinking about all they have to do. Don't let this be you. If you do one little prep today, you'll be one prep closer to a positive outcome than you were yesterday, and so on. The key is to keep pushing forward, and before you know it, you'll be much better prepared and proud of your accomplishment.

Here is some free, downloadable loot, which can help you improve your preparedness.

Download the free, Five Tips for Begining Preppers, tip sheet (shown in the image above) if you'd like to learn how to overcome many of the common problems that face people new to prepping. If you're an experienced prepper, this sheet makes a great handout to give to those who you are helping by showing them the preparedness light. 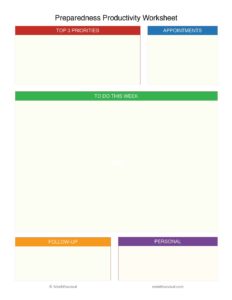 The Preparedness Productivity Worksheet is simple to use. Just print off the page you need. Then, sit down and lay out your long term and short term goals on whichever sheet applies to your goal. Then, as you move throughout the days, weeks and months, you can check back to the preparedness productivity worksheet and make sure you're on track. As time passes, you can update the sheet to reflect your current situation, goals, and vision for the future.

If you have any other thoughts or questions about five tips for beginning preppers, please leave a comment below.

Thanks for Listening to This Episode!