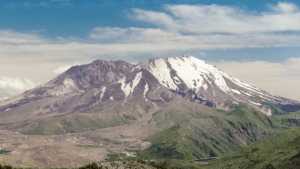 On May 18, 1980, Mount St Helen's which is located about 100 miles south of Seattle and 50 miles northeast of Portland, Oregon.

In this episode, we will talk about:

Why is this information helpful for preparedness?

Hopefully, you don't ever have to experience a volcano eruption. However, it’s good to understand the science behind it, even just some level of how rocks are formed, how nature happens around us. So when you're driving around, when you're out in the desert, you're in the mountains or you're going somewhere. you know enough about what you're looking at and you can say that might be a dangerous thing.

On May 18th, 1980 Mount St. Helens, which is located about 100 miles south of Seattle and about 50 miles northeast of Portland, Oregon, erupted. It's up in the Cascade Mountain range. And all that with Mt. Rainier, Mount Hood, a bunch other volcanoes up there when the eruption happened that resulted in the deaths of 57 people, along with this destruction of about 250 homes, nearly 50 bridges and hundreds of miles of roads.

They never found some bodies up there because in that gigantic wall of mud and boiling water and lava and all that stuff comes barreling down the side of the mountain hundreds of miles an hour. It doesn't leave a whole lot left in its trace so that they had some people definitely go back to nature that day.

Mount St. Helen's is a large cone made of layers of lava rock, ash, and other deposits.

The Cascade mountain range is part of the Ring of Fire known as the Cascade Arc, which consists of 160 volcanos. Yeah, 160 volcanoes in that little volatile corner of North America.

If you have any other thoughts or questions about how I'm a crazy prepper, please leave a comment below.