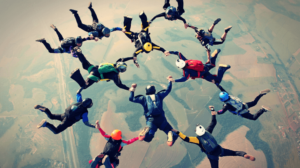 While the first Rambo was a great movie, it set a bad precedent for many people in the preparedness niche who now feel they can go it alone during a disaster or other difficult times.

Since I first began prepping back in the ‘80s, there is always talk of people going solo during difficult times. Well, we're in a difficult one now, and how does the idea of being completely on your own, reliant just on yourself feel? While living like John Rambo in the woods of Washington may seem doable. Is it really and it is smart?

In this episode, I show that teams ARE the better solution and why.

Most People are Not John Rambo

Most people are not John Rambo, and those who are even close would probably tell you it's not a good idea.

Dunning-Krueger Effect: “Those with limited knowledge in a domain suffer a dual burden: Not only do they reach mistaken conclusions and make regrettable errors, but their incompetence robs them of the ability to realize it,” they wrote.

In the movie "Castaway" how ready was Wilson to help Tom Hanks? Daily survival needs never stop. Did he help him get water? Did he help him start a fire? What did he help did? No, he was a do with a handprint on. It was a ball with a handprint on him that Tom Hanks used to have somebody to talk to and to break the social isolation that he was dealing with. And other than that psychological effect, Wilson was absolutely worthless for helping Tom Hanks, his character, do anything right.

The movie "Leave No Trace" shows how it's not hard to get hurt or sick, yet if you're solo it may be hard to get help. it really shows how when you're on your own, you are so vulnerable to what goes on out in nature. We cannot control what happens in nature. Mostly trees fall, storms happen, we get sick. So I recommend go watching, leave no trace and you can see what happens when you're solo. Thankfully, the main character in the movie had his daughter nearby. And, you know, it all kind of works out.

Eyes in the back of your head or when sleeping? None of us can be locked in one hundred percent of the time watching everything, too, and everything around us. it's impossible to do that. You are going to wear out if you're on your own and you're trying to be hyper-vigilant and watch everything going around you. You need a team for that.

Let me know if you're a professional that is ready to go out and do everything solo. You have it one hundred percent wired. You can live out of your backpack for the rest of eternity and do your own thing. I imagine not many hands went up. And if your hands did go up, well, man, please call me because I'd love to have you on the podcast because. Hey, you must be. The tactical alone solo survival genius out there, they can do it forever.

The truth is most people don't have the mindset, don't have the capabilities, the skills and knowledge to go solo for really long periods of time. You're gonna have to interact with people because we need that support.

Social Isolation is Not Always Good

The problems associated with being the lone wolf, or solo survivalist, have to do with just that, being solo and a lack of help, support, and companionship.

"Isolation in prison isn't a thing because it's good for the person in isolation. And, at least they have their meals brought to them. Humans are social creatures and always have been. For example, solitary confinement can have negative psychological effects on prisoners – including significant increases in anxiety and panic attacks, increased levels of paranoia, and being less able to think clearly.

Many prisoners also report long-term mental health problems after being held in isolation."

According to Mayo Clinic, social isolation and loneliness are associated with a greater risk of poor mental health and poor cardiovascular health, as well as other health problems.

According to ScienceAlert.com, they're also more likely to feel depressed and may have problems processing information. This, in turn, can lead to difficulties with decision-making and memory storage and recall.

People who are lonely are also more susceptible to illness. Researchers found that a lonely person's immune system responds differently to fighting viruses, making them more likely to develop an illness.

But some people who have faced the challenge of being alone for an extended period of time may show personal growth – including emotional growth, feeling closer to family and friends, and having a better perspective on life – as a result of their experience. And some people in experience a greater appreciation for people and life, better attention and focus, and overall feeling happier than before upon coming out of isolation.

How to Build a Good Team

Be true to your word. If you demand high productivity and quality work, you'd better be as good as your word. You get what you give. If you promise to do something, be sure you will fulfill it. When team members notice that you are a reliable person, they will emulate your behavior.

Create an environment that supports team bonding. If you want to improve teamwork, help people get to know each other better. Organize in-person get-togethers as often as is realistically possible.

Take advantage of conflict. There are no teams exempt from occasional misunderstandings. Somewhere, somehow, conflict will show up. When a confrontation between people gets out of hand, it must be dealt with. Don't complicate the situation by deciding what is good or bad. Listen to all sides carefully and then talk to others who may provide insight. Brainstorming solutions favorable for both sides may even result in ideas that would never have come to mind without the conflict. It does not mean that confrontations are good, it just means that they make people think about two points of view of the matter. More points of view mean more possibilities.

Make adding new people to your team a group effort. If you want to bring a new person in, talk it over with your current team. Set up opportunities for everyone to get to know one another. Remember, when it comes to preparedness experience, skills and qualifications are important. And the most important qualities for the team are always personality and social skills that are in alignment with your values. With regards to trust and respect, we talked about earlier, it's our personalities and ability to work together through good times and bad that is most important The ability to effectively communicate within the team is what makes the team great. On the other hand, just looking to add people into your circle of trust-based skills can totally upend the apple cart. Not everyone with a resume is a good fit!