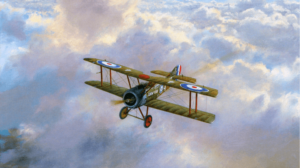 Have you ever looked at an item that you use almost daily and wondered where it came from and what its history is? Well, in this episode we’re going to talk about six items that are World War 1 inventions, which had and some that are currently having a significant impact on society.

In this episode on World War 1 Inventions

Trench coats were not created to be fashionable. Instead, they were designed purely to satisfy a practical need. That need was as a replacement for the heavy wool, great coats that were issued to British military officers. While the wool coats provided warmth, they also became extremely heavy when wet making movement more difficult.

With necessity the mother of invention, British soldiers serving in the trenches during World War I sought help in creating a more practical option to the wool great coat. What the English clothing industry came up with was the early version of the modern trench coat. The trench coat, in opposition to the long wool greatcoats, was lightweight, waterproof, and made with deep pockets for holding maps and other necessities, along with a waist belt consisting of metal rings for carrying needed equipment.

Benjamin Franklin is credited with the idea of putting clocks forward during the spring and back in the fall. It was in a 1784 letter to a French newspaper where Franklin first suggested that candles were wasted during the summer. His reasoning was because the sunset before people went to bed, so in turn, they lit candles to see. Likewise, he believed that people wasted daylight by sleeping well past the sunrise.

It wasn’t until World War I that the notion of Daylight Savings became a reality. At that time, due to the demands of the war and coal shortages, Germany mandated that on April 30, 1916, that clocks move forward from 11:00 pm to midnight. The thought is that the extra hour of daylight in the evenings would use less coal for heat and light.

Britain followed Germany’s example and initiated daylight savings on May 21, 1916, with other European countries making the transition as well. Eventually, on March 19, 1918, following its entry into the war, the US implemented Daylight Savings Time and established time zones to help its war effort.

The first use of unmanned aerial vehicles happened on July 12, 1849. This first attempt by the Austrians at using unmanned balloons to carry explosives over the besieged city of Venice was a failure due to unfavorable winds. However, while the young artillery officer who created the idea failed on his initial attempt, his second effort on August 22, 1849, achieved a small level of success.

While the attempt to float pilotless explosives-laden balloons over Venice was only marginally successful in damaging the city, it did have a psychological effect on the population. It was the psychological impact, combined with other stresses of the siege, that pushed Venice over the edge and resulted in their surrender two days later.

Meanwhile, the first use of pilotless, motorized aircraft took place on Long Island, New York, on March 6, 1918. The brainchild of two Navy inventors was designed as a pilotless aerial bomb. In short, while creating the first motorized unmanned aerial vehicle, the two inventors simultaneously created the first cruise missile.

With a wingspan of just under 19 feet and a 12-horsepower, the pilotless aircraft weighed in at 175 pounds. When flown, the plane was pointed in the general direction of its target and using gyroscopes, and an altitude limiting barometer was launched into the air. Unfortunately for the two inventors, the unmanned aerial vehicle was too inaccurate to be reliable. This inaccuracy caused the Navy, in 1925, to shelve the program, putting off the progress of drone technology until a later date.

It’s true that wristwatches were not invented for the troops in World War I. However, it’s also true that the use of wristwatches saw a dramatic surge in popularity because of the war. It was this surge in demand that made wristwatches the primary method of keeping track of time following World War

At that time, men who were able to afford a watch, carried it in their pocket, secured with a chain, and did so up through the early part of the 20th century. Therefore, with men insistent upon carrying watches in their pocket, it was up to women to set the foundation for the widespread use of wristwatches. In particular, it was Elizabeth I who would strap a small clock to her wrist to tell the time.

As the war raged on though, the ability of military officers to synchronize events, while keeping both hands free became more critical. With this in mind, watch manufacturers began creating wristwatches to help soldiers and pilots tell the time without having to dig in a pocket for a watch.

One of the main drivers for the use of the wristwatch was the tactic of the “creeping” artillery barrage. It was during “creeping” barrages that artillery was used to cover advancing infantry. The artillery was fired just in front of the infantry advance and due to limited communications, was synchronized using precise timing. In other words, exact movements of military units were scheduled and coordinated, and to not be blown up by their artillery, required infantry leaders to have a readily available watch.

The use of the wristwatch in the war became so predominant that the New York Times released an article about their use on July 9, 1916.  That article stated that accurate timing was so crucial that portions of the military made wearing a wristwatch a requirement. The article went on to say that reports from Europe show that “strap watches” as they were called then, were adopted for use in the army and navy, which eventually led to use by civilians who preferred them to the pocket watch.

Inventors worked to find an easy and reliable means of securing clothing while also keeping the weather out. The first known person to make an effort at this was Elias Howe, the inventor of the sewing machine. Howe’s attempt to create what would eventually become the zipper ended with his receiving of a patent for the “Automatic, Continuous Clothing Closure” in 1851.

It wasn’t until nearly fifty years later though, when Whitcomb Judson produced and promoted a zipper-like device. Unfortunately, this early version of the zipper did not meet with much commercial success. Instead, it wasn’t until a Swedish born, American citizen, Gideon Sundback became involved that what we now call the zipper came to be.

Gideon, an engineer by trade, worked on the design, coming up with the modern zipper in 1913. Eventually, he received a patent for the “Separable Fastener” in 1917. However, it wasn’t until B.F. Goodrich’s use of zippers in rubber boots that the term zipper was coined.

For the two decades that followed, the use of the zipper was primarily limited to securing rubber boots and tobacco pouches. Then, in the mid to late 1930s, the fashion industry began incorporating the zipper into clothing. Once accepted by the fashion industry, the use of zippers became the norm with tens of thousands of miles of zippers now produced around the world.

The person credited with inventing “rustless” steel, now known as stainless steel, is Harry Brearley from Sheffield, England. While Brearley invented stainless steel, he did so by accident when working on a solution for the problem of corrosion (aka rust) in military weapons.

It was in 1913 while trying to fix the military’s rust problem, that Brearley noticed some of his prior “failed” attempts that were sitting in the scrap heap, began showing their resistance to corrosion. These, what at first was considered failed attempts, which were ultimately proven successful at creating rust-resistant steel were formed by adding a mixture of approximately 13% chromium to the manufacture of molten iron and led the way to future developments with improved metals.

Quote of the Day:

Today’s quote is by Benjamin Franklin who said,

“As we enjoy great advantages from the inventions of others, we should be glad of an opportunity to serve others by any invention of ours, and this we should do freely and generously.” ~Benjamin Franklin

If you have any other thoughts or questions about world war 1 inventions, please leave a comment below.

Thanks for listening to this episode about the world war 1 inventions.