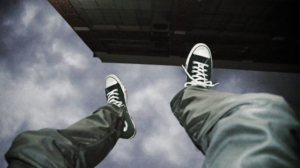 Preppers and Fear Psychology | It bugs me when people, especially people who profit from the prepping community, try to use fear as a motivation for others to prepare.

In this Episode on Preppers and Fear Psychology:

In the case of people who make money from within our community, and there's plenty of people out there doing it, fear is often used to part people concerned about their future safety, from their hard-earned dollar, maple leaf, euro, quid, and peso. Hard-earned and often limited in amount.

Limited in amount so that every rationed preparedness dollar has a future attached to it and should be used effectively.

Personally, that goes against my core values. The bottom line is, scaring people into preparedness, in my opinion, often does more harm than good.

I believe that regardless of the category of disaster, micro or macro, most people on the face of the planet know that hard times may be waiting just down the road from us.

Everyone knows that hard times are waiting to jump us when we least expect it, or more likely when it is the most inconvenient.

Now, for those who may not know, I break disasters down into two categories. The first category is micro-disaster. Micros-disasters are a disaster that impacts you and your family. Disasters such as a job loss, a severe illness, a fire at home, or whatever you can think of. A micro-disaster can be devastating for the person involved and their loved ones. However, typically society, even at a regional level, is at worst minimally affected.

Typically with micro disasters, the families involved can support those impacted. As a result, other family units are not affected, and life, for the most part, goes on.

It's when the impact of a disaster increases and it extends to multiple family units (again with close friends considered family) that a disaster transitions from micro to macro. For example, a water main breaks, resulting in loss of water to a several block section of the neighborhood. While some families may be able to cope with tragedy, there will be a portion that will suffer, or worse, if aid is not provided to them.

While it may seem like no big deal for preparedness-minded people, it is actually a massive deal for them. It's a big deal because some people focus either all or most of their preparedness efforts solely on macro disasters. And, while macro-disasters are definitely devastating, they are far less likely to impact a person than a micro-disaster is.

The reality is that we are far more likely to experience or know someone who will experience a micro-disaster than a macro-disaster. In spite of that, what gets all of the air time? Major disasters, that's what.

Disasters Are Not a Myth

Preppers and Fear Psychology | Disasters Are Not a Myth

Now, back to talking about fear. I was saying, everyone knows that disasters are possible. When I say everyone knows, I mean there is virtually no one on the planet that doesn't know disaster happen.

While everyone has their own definition of what minimum preparation is, everyone should prepare none the less. And when people prepare, they should do so to whatever extent they think is best for their family and loved ones.

Where frustrations of the those who prepare often rise are concerning those how don't get ready. After all, as I discussed, everyone knows that they will experience suffering at some point. However, unfortunately, having to think about a disaster to prepare for it prevents many from preparing at all. The sad truth is that not everyone wants to face what we as peppers generally accept and prepare for.

It's because preppers usually accept disasters happen that causes many of us not to understand why other people don't. After all, it doesn't make sense if someone knows a problem exists and in spite of that, does nothing to avoid or minimize the problem. Making matters worse is that because not preparing doesn't make sense, many of us feel that the unprepared don't get it.

So, when people don't prepare as they should, we do whatever we can to try to make them understand. Hell, preparedness is essential. Because it's important, our efforts to make them know often include "do whatever it takes to convince them" tactics. Tactics usually used on those closest to us or who we can reach through our keyboards.

Illustrate Them Into Understanding!

Preppers and Fear Psychology | Illustrate Them Into Understanding!

Perhaps the most common form of illustrating the importance of preparing is with the use of current events. When we see a hurricane approaching, we end up with Hurricane (Insert Name Here) Watch 2019. Or, Flood of the Decade, and on and on and on.

While that's a problem, the real challenge comes when we combine our illustrations with fear. It's then that we take several actions such as continually saying the big one is coming.

I mean seriously, there's a reason the folk talk about "Chicken Little" came into being. And actually, the Chicken Little fable is based upon a Buddhist Jataka story, which from between 300-400 BC, called, "The Sound the Hare Heard." Jataka stories are stories about the former lives of the Buddha.

The downside of the "Chicken Little" story for us is that as a community, we as preppers are often all painted with the same brush by other members of society. The brush that labels us all as "Chicken Little's," whether we are or not.

The problem is that we're using our tactic of disaster illustration and combing it with fear. Adding to the problem is that we often use our motivation tactics at the highest decibel possible, and as frequently as possible. In other words, we, in effect, become "Chicken Littles."

The fact is, surveys show one of the most sought after goals of preppers is to have improved confidence so that they can rise to the occasion when times get tough. Whether those tough times are a micro or macro disaster, people want to be mentally prepared to deal with it as best as possible.

So, let me ask the question. When novice preppers turn to prepping hoping to gain the skills and confidence to protect their families and friends, why in the hell are we as a community trying to scare them? Does that make any sense? "

Before we get going on that, let's define fear.

Fear, according to Merriam Webster, is:

So, just by their simple definitions, how confident do you think someone is when they are AFRAID. Fear doesn't build confidence. Actually quite to the contrary, fear can chew up confidence like a pride of hungry lion's munching on a wounded zebra.

Therefore, let me ask you this. If we want others to get prepared. If we're going to be accepted as a community as more mainstream, should we try to scare the new and inexperienced?

Should we treat them like a little brother or sister on Halloween? Or, should we use methods that help show people the benefits they'll gain by being prepared?

After all, how often do we hear people genuinely talk about preparing for a job loss, or a severe illness to a family member when it comes to prepping? How does that happen when compared to people saying how we should prepare for that EMP, we just know is coming? And, do we really wonder why some people think we're crazy?

While it seems simple to not scare people new to prepping, I don't believe it is. At the same time, I believe the preparedness community will be served a lot better if we think about how we approach preparedness, especially when speaking with others about it.

I'm not saying to be politically correct. However, at the same time, what I am saying is to consider what we do as preppers that keep others from joining our community. The real tragedy is that sometimes, as I mentioned earlier, those others that we scare also include our own family members. Family members who we often want to be receptive to our prepping mindset and goals.

How to Get Someone to Prepare

Preppers and Fear Psychology | How to Get Someone to Prepare

So, when talking with people, primarily people new to preparedness, why don't we use a different tactic? Why don't we try to coach, support, and encourage them?

Instead of saying that a disaster may happen tomorrow, tell them it's highly unlikely anything significant (as in a macro-disaster) will happen anytime soon. Let them know that by asking, they've already taken the first step to becoming better prepared. They're opening their minds to it and taking decisive action, which is a huge step forward.

Then, at least they're thinking is somewhat on the right path as they head into difficult times. Not to mention at some point, they may become really prepared. And, by becoming really ready, they'll influence others as you did them.

Next, to head off one major new prepper pitfall, let new preppers know not to feel overwhelmed. Tell the new preppers that with the chances of them experiencing a macro-disaster is very low. Then, let them know that feeling nervous and overwhelmed as a new prepper is totally normal. Hell, we are talking about disasters after all.

After that, let them know that you're there to help logically guide them. And you'll help guide them so that if a disaster ever does impact them, they'll be more likely to experience a positive outcome. Also, let them know that preparedness is a process and can be a very long process of progress.

If you have any other thoughts or questions about Preppers and Fear Psychology, please leave a comment below.

Thanks for reading about Preppers and Fear Psychology.