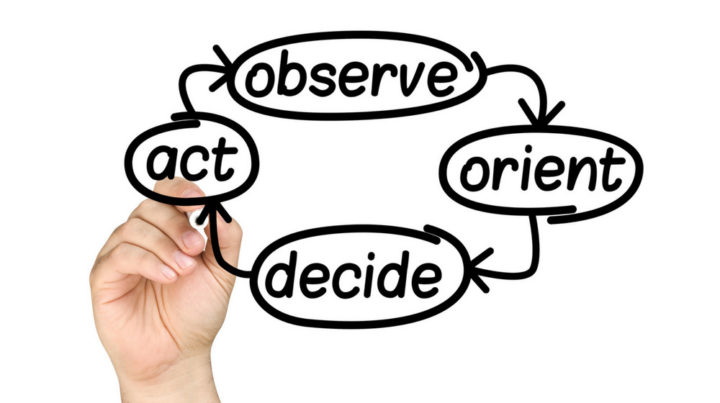 OODA Loop? Is it cheese? No, it’s not cheese. The OODA Loop situational awareness philosophy is the brainchild of Colonel John Boyd, who was a U.S. Air Force Pilot and military thinker.

This video illustrates what the actions of one observant, prepared, and brave person can accomplish.

In this case, Jon Meis was a Seattle Pacific University student security guard. Meis survived an active shooter incident and saved lives.  Meis did so by, knowingly or unknowingly, employing the principles of OODA loop situational awareness. He…

Jon Meis epitomizes the classic example of OODA loop situational awareness, whether it was deliberate or not. When he quickly became aware of the issue and assessed that it was needed, Jon was ready and willing to take decisive and effective action.  In so doing, he saved his life and the lives of unknown numbers of other students.

As I mentioned in the intro, Colonel John Boyd was a U.S. Air Force Pilot and a great military strategist.  His OODA loop philosophy helped fighter pilots to combat their opponents better. It did so by helping them to out-think their enemies by using a systematic thought process. This allowed them to make better decisions faster.

Eventually, it proved so useful that it became a primary core philosophy of preparedness that applies to all aspects of life, business, and survival.

Preparing for a situation like this is not difficult.  What is difficult is identifying the problem, or in this case, the threat.  There are far too many examples of people needlessly suffering because they failed to recognize a problem was about to occur.  They failed when the issue should have been identifiable.

Therefore, do not fail; start every day with a commitment to yourself.  You must commit to using your powers of observation and situational awareness to identify developing situations.  Does this mean you move throughout your day, paranoid and on edge? No, it means you listen to your gut.  It means you take in the environment around you.  It means you look for things that you think are not normal.

When you do observe something that doesn’t seem reasonable or makes your sixth sense poke you, you need to take notice. Pay attention to the situation and what is happening around it.  Try to identify what it is that doesn’t seem right. As you do, you’ll be one step ahead, processing the events and figuring out the unfolding situation.

Regardless of what you do, make a decision.  Do not stand there, frozen, like a lookie-loo on a Southern California freeway.  Make a decision!

Once you make your decision, it’s time for action.  When you initiate your course of action, do so with commitment and determination.  Maybe your chosen course of action is to leave the area because there is no threat.  If so, then leave while continuing to remain vigilant.

However, if your course of action is like Jon Meis, to become involved, then do so with a 100-percent commitment. Anything less than 100-percent engagement decreases your chances of a desirable outcome.  Go hard or go home. So, remember when taking action, be like a momma bear saving her cub; relentless and in total survival mode.

If you follow the basic premise of the OODA loop situational awareness philosophy, you can become better prepared to overcome difficult situations that may arise.

By noticing what goes on around you earlier, making better decisions faster, and taking confident action, you will help yourself be better able to survive and thrive in any situation.