Home » Should You Bug Out or Bug In? It Depends…

Should You Bug Out or Bug In? It Depends… 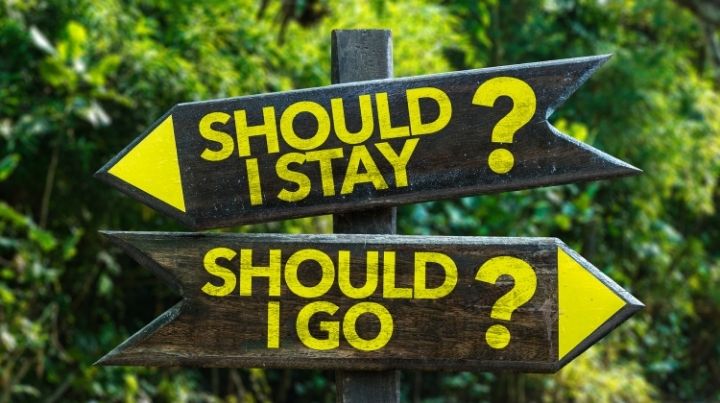 Bug out or bug in? That is the eternal prepper question.

When it comes to your decision to hunker down or evacuate, the work happens before the emergencies occur.

The preparation for multiple possibilities is paramount. Many preppers combine a mix of bugging in and bugging out, but at what point do you make a judgment call between both choices without it turning into a frog in a boiling water situation?

How do you make that decision of whether you should stay or go? Definitely read the rest of the article and for more information on when to bug out or bug in, watch this video from The Survival Preppers YouTube channel. (Potty mouth warning!)

When to Bug Out

According to the Merriam-Webster dictionary, “bugging out” is to retreat during a military action, especially: to flee in panic. 2. To depart, especially in a hurry. The military coined the term during the Korean War when units or personnel were ordered to flee if the enemy was overrunning their defensive positions.

Other terms frequently used in the prepper lexicon are evacuating and GOOD (Getting Out Of Dodge).

There are situations beyond military actions that probably did not occur to the people who first coined the term but apply to evacuations. Calamities such as Hurricane Katrina or Typhoon Haiyan prove that preparing well before the time comes to leave is essential.

For example, perhaps you live in an area below sea level and have to move to higher ground during a storm surge. Other examples of reasons you might need to leave your home include nuclear disasters, floods, industrial accidents, or a wildfire. Evacuation provides an opportunity to move to a better location in terms of safety or resources.

Additionally, there’s always the option to keep moving if a bug-out location (BOL) is compromised or proves to be undesirable. You’re ready and prepared for travel, so you’re less likely to be stuck in one spot. For example, if your initial shelter is compromised, you still have your gear with you. So, you can move on to a secondary location.

You did plan your secondary BOL, right?

Another benefit to heading for less populated areas is, in many cases, more abundant availability of life-sustaining resources. For example, during disasters, you may have limited access to running water in urban areas. By leaving early, you may also avoid being sealed off in an unsustainable urban environment, where you are possibly cut off from assistance, additional resources, and family.

Choosing Your Bug Out Location

If you pick a rural BOL, you will be more likely to avoid disaster-related risks such as civil unrest, sanitation-related disease, and shortage of resources. If you do evacuate, it’s critical to make sure that you always keep your gear with you and think about how you move. Also, consider varying your routes, changing up your rest patterns, and working to be as unpredictable as possible. When you do, you will become a more difficult target for others who may be less prepared and need your stuff for themselves and their families.

One additional advantage of going to rural areas is the ability to conceal your movement more easily. Hiding your movement makes you more difficult to find and less likely to encounter problems of the two-legged variety. While it will not always be a walk in the park, with the right skills and preparations, it can give you a better chance to survive the disaster. Plus, if the catastrophe goes on long-term, you’re self-reliant and are lucky enough, you may be able to chop out an existence.

While many people have bugging out as their Plan A, there are other factors to consider that might make it a less realistic option. In fact, many people within the prepping community argue that leaving your home and supplies should be regarded  ONLY as a last resort.

The Dangers of Bugging Out

Bugging out can be dangerous for many reasons. During the rush to move from one place to another, you’re more likely to be noticed by others. It only takes one person to cause you problems. Unfortunately, when a significant disaster enters the mix, there could be plenty of people out, creating plenty of problems. For instance, think about the traffic jams that may happen. What about the insanity that comes with countless people stranded on the highway, many miles away from home?

When planning to evacuate, you will also want to consider whether people perceive you as weak or someone to avoid. Don’t forget, having fancy gear, a lot of food, or standing out in any way increases your chances of having a negative encounter with someone. So, remember to think like the gray man and blend into your environment.

Even without the vulnerability that goes with leaving your home, limited resources can make it an iffy proposition at best. In the end, you can’t carry everything in your house on your back. Fuel, food, and other necessities will eventually run out, often sooner than expected. Unless you have a way of gathering more, you will only have the supplies you’ve brought with you.

Next, even if you make it to your BOL, your access to adequate and sustainable healthcare may be limited. Because of that, even minor health issues could become life-threatening problems.

Bugging in is securing your home or another location as a shelter when a disaster or other difficult times occur. By hunkering down at home, your tools, gear, food, and other resources will be with you. Not only should they be with you, but they should be present in enough quantities to survive over time. Therefore, sheltering in your home reduces the need to move outside of your sphere of influence. Doing so also reduces the risks associated with the movement to your BOL.

The familiarity of knowing your surroundings makes defending your home and family easier. Additionally, because it’s on your turf, your uncertainty and fear should decrease. You’re already aware of your surroundings. In turn, this allows time to ready your home or apartment, prepare defenses, store supplies, and prepare other self-sufficiency techniques (water collection, garden, livestock, renewable energy, etc.). Ultimately, how you make yourself ready is up to you and the effort that you put in.

Bugging out is hard on the young and old, the sick and injured, along with other vulnerable loved ones who may not have the physical strength to handle the trip. It may be safer for them to hunker down. Avoiding the potential rush of people as they clog the streets and highways to get away from the problems is another consideration – you’d be in an even worse situation, trapped in your vehicle in traffic when a hurricane hits. Then, there is always the common-sense point in that there is way more storage space for all types of preps.

The Pitfalls of Hunkering Down

Sheltering in place is not without its downside. If neighbors know you as the “prepared” type, they may come asking for help. When this happens, you can find yourself in a challenging position. Either you help by giving away your family’s resources, or you can say “no.” However, saying no sentences them to struggle under some potentially dire circumstances. As well, if angered by your refusal to help, your neighbor could become a problem down the road.

On that note, if the situation deteriorates enough, there may be very few (if any) opportunities to restock if your supplies run out. Also, you become a stationary target that may be attractive to others.

Hygiene and health are significant concerns with hunkering down during a long-term disaster or post-collapse environment. During these difficult times, the potential for exposure to sickness and disease increases. In turn, this increase makes adequate sanitation in the home an essential part of your preparedness plan.

So…Should You Bug Out or Bug In?

The decision of whether to stay or go is difficult because each plan has pros and cons. Both are possible actions that you may consider during a disaster or other emergencies. They both require forethought, planning, and preparation – preparing ahead and planning how to deal with an emergency. In the end, both also require knowledge, skills, training, and motivation to be effective. Both are meant to protect you and your loved ones.

Both require the stockpiling of resources. They both also require familiarization with your equipment, others within your group, your overall situation, and disaster procedures. Both are also susceptible to attacks from hungry neighbors or random strangers, and neither option is foolproof.

The biggest factors in your decision to bug out or bug in are the number of supplies you have on hand, the safety offered by your shelter, and your ability to avoid conflict.

In the end, each of us must decide upon our course of action. We should base our decision on the factors discussed here, along with others specific to your situation.

Here’s one last crumb for you to chew on. You really should consider prepping for both scenarios. That way, you’re ready for whatever your situation dictates and can make a sound judgment call when push comes to shove.

Are you planning to bug out or bug in? Do you have contingencies for both, or are you firmly committed to just one or the other? Let us know in a comment below.