M4S 090: Stories from a Truck Bug Out Vehicle 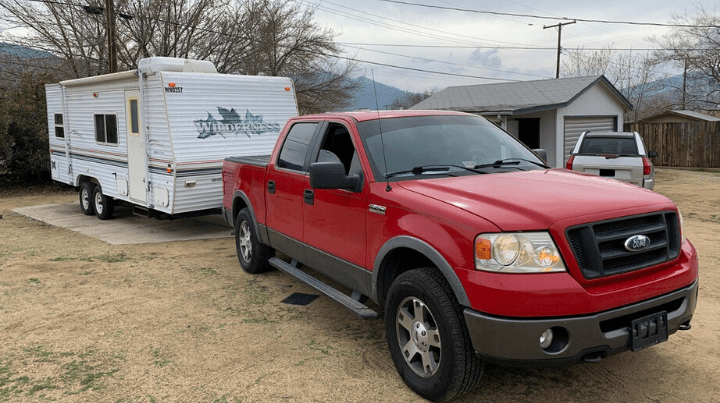 Well, I did it. I up and bugged out. Why did I load up my truck bug out vehicle with as much as I could stuff in it and get out of Dodge?

I hooked up that oldish trailer and bugged out for a number of reasons:

My Truck Bug Out Vehicle Adventure

My road trip/bug-out experience included all sorts of crazy things.

Packing My Truck Bug Out Vehicle

Before I started my trip, I was up for twenty-seven hours straight, driving and packing. I drove to my dad’s house in L.A. Then we drove up to the Southern Sierras, where he has a little cabin and a trailer with a hole in the roof. And I picked it up there and then drove back to Vegas, where I arrived about 10 p.m.

And I was thinking about this virus, and I don’t trust this thing. I had been sitting home obsessing about the damn thing since January 25th. So I got home, and I just started loading my stuff. First, I had to reorganize everything because I’ve got OCD about organizing.

I packed everything I could into that trailer. At that point, you’re in commitment mode because whatever you have with you, that’s all you’ve got, folks. I loaded for bear, man. And that was it. I hit the road in my truck bug out vehicle.

Then to add to the fun…and what really made it not an easy task… is that I actually got caught in a winter monsoon.

You know, you get the rain that is about medium, then it increases to that really hard rain. And then it kind of goes just past the really hard rain to where there’s just too much rain for the wipers to do the work.  Well, that’s what I hit leaving Vegas. And when I left Vegas, I was towing 20 or 21 feet of a travel trailer from about 2000. The bumper was hitting because it was so loaded with my buckets of rice and much prepper crap as I could carry. The back of the truck was also full. I had two cats, and I had my dog. It was an ordeal.

The monsoon hit about 20 minutes from my house, maybe 30. I was too far to go back because I couldn’t see the road. And it’s like, what do I do, man? So I pulled behind this truck stop that’s just north of Vegas. It’s raining, and oh, mind you, I had a leak in the roof of the trailer in this one corner. It’s not a terrible leak. I had some of that flex seal on it. It definitely needed some work or to get an out from underneath the thing called the sky that drops water on top of us. And that was only the beginning of my truck bug out vehicle adventure.

Anyway, I went to sleep.

I woke up in the morning and fed and watered the dog and the cats. I’m pretty happy now because, again, I’ve gotten on the road. Everything I have with me? That’s it. I’m not going back. I open the door of the trailer to look outside. That monsoon moved on somewhere, and all that water from the monsoon was coming down the road I’m on.

I hadn’t even been on the road for 6 hours. Literally, I got 20 minutes down the road—boom, monsoon. I pull over, wake up later, and what do I get? A flash flood outside my trailer doors.

I’m thinking, OK, dude. This is how some bad shit starts. Like, really, I’ve been sitting here, and I’m doing my bug out, and this is how I start. Maybe I should go back at this point. Then I decided, no, man, I’m driving on.

The next hour, I’m actually out on the road.

I drive for a while through a little piece of Arizona.

Then I get up in Utah. Oh, man, it’s gorgeous up there, right? Well, that was a long day.

All this white shit started falling out of the sky. It started snowing, man. So it starts snowing on me going up into Utah. And I keep going. Keep going, keep going. Tell you what, it’s like the monsoon of snow. Like I literally can’t see anymore. And the road is getting crappy, and I’m towing an overloaded trailer.

But that’s not all.

This wasn’t a disaster but was kind of an annoyance. So, I pull into a motel or hotel, or Microtel, there’s so many different -tels, whatever, and I go down to the end and turn the corner of the hotel and boxes around the hotel. It’s a dead-end like 20 feet down there that you really can’t see before you go.

I was like, man. It’s really coming down. It’s cold. I didn’t want to mess with it. Turning a generator on or turning on the heater in this thing and getting the propane and all that going in the middle of a storm in the trailer, it’s loaded with crap and two cats and a dog.

So I decided to practice my best safety technique and get a room. Now I know that was a huge risk considering at this point, we knew practically nothing about the virus. I wanted to be as careful in the room as I could be, so I wiped stuff down. Then I had Domino’s Pizza.

Shower time – I just couldn’t wait to feel that hot water bath. But I couldn’t get the hot water to come out too steady. You know why? Because it was running all over the damn floor. And it got my carpet wet. Oh, what a mess.

So after the blizzard, the next day, I get up and head out in my truck bug out vehicle. I go through Idaho and Wyoming. Very nice drive. Outside of Cheyenne, I didn’t know you had to go up a big mountain. I’d never driven through there before. So what? Cool, no big deal. But when you’re loaded down with a travel trailer full of crap and a truck that’s an F-150, it can be an issue. Would my truck make it? It did. It didn’t like it very much, but it did a good job, and I’ve given her rest for quite a while now. She has some blisters on her feet, I think.

I’m going up into Cheyenne, Wyoming. And some fog starts coming around, going up the mountain. Then more fog comes. There seemed to be this thing with the weather. I’m noticing it would start up a little, and then it’s like, oh, Brian Duff’s here. Let’s go ahead and just turn it up a notch. And so the fog comes in, so everybody’s driving like 20 miles an hour with their flashers on. And that went on and on and on and on. I get over the mountain fine. I’m like, oh, thank God. It wore me out, so I pulled into a gas station.

I stopped to get gas, and I’m fueling up, and it’s cold out, man, and this heavy, heavy fog comes in. That heavy fog turns into an ice storm. I’m there within 10 minutes, and it was taking me five minutes or so to gas up by the time I take a step to go next to my truck. The ground is already slick, and I’m like, oh shit, it’s coming, man. I’m like, OK. I’m not going up any hills with my truck loaded down with this stuff in an ice storm.

I see this mechanic shop across the street, and it’s Saturday night going into Sunday. I don’t know too many mechanic shops that are open on Sunday, so I think I should be safe before getting hassled to get on the road. So I parked in there. I climbed into the trailer, go to bed and go rack out.

I wake up in the morning. And it just this weird, quiet man, I’m like, what’s going on now. I look out the window, and everywhere I can see, the power is out. Now, what do you do when the power is out when you look out in the after monsoons, blizzards, and all that, and the power is out?

What’s the first thing is a crazy prepper like me would think about? I’m like, oh, no. Now we got hit with an EMP. I’m like, are you kidding me? I’m stuck in a parking lot in Cheyenne. Not that there’s anything wrong with Cheyenne. I just would rather not be stuck in a parking lot in Cheyenne. So the first thing I did check was the cell phone, and it was still on, so I breathed a big sigh of relief.

All the ice brought down power lines. All the power’s out. Luckily, I got gas that night because the power was out to the gas station. That stuff wasn’t pumping. I end up going back to bed, slept for three hours, and finally, it started warming up enough to at least melt the ice, and I got back on the road.

That was a sketch and a half. Oh, boy.

Getting Lost with My Truck Bug Out Vehicle

And then the last little faux pas on the trip was, now, I don’t know if I’m gonna blame it on Google Maps or Apple Maps, but probably user error. I got off the highway somewhere south of Chicago. I don’t know, North Indiana, somewhere.

And it was not the place to get off the highway.

It reminded me of going down to New Orleans and just not being in the right place, especially in my truck bug out vehicle loaded down with a dog, two cats, and all the crap again.

So, yeah, that was a little pucker factor there for a minute. Just because I’m like, you know, I just don’t want anything to go on and draw attention to myself because there was no place for anybody to drive other than like every lane on the street. There was no parking on the street. I’m like, where am I going to break down with this trailer? It just wasn’t the best side of town.

Oh God, just get me there.

I had it. I thought I was more set to pack, get my stuff and go than I was. And I’ve practiced that in the past. I’ve actually practiced loading up and doing this stuff. And you know what? There’s nothing like the added stress of possible reality and danger sometimes to make us wake up a little bit.

The Bottom Line on Stories from a Truck Bug Out Vehicle

One of the things you’ve heard me talk about before is having a deliberate mindset. We need to go about our life, possibly now with a more deliberate mindset. I don’t like the phrase deliberate mindset because it makes it sound so rigid, and that’s not how we as humans necessarily have to operate. A lot of people call it hippie stuff and put it down. But, practicing to get mindful, working on staying in the moment, that’s situational awareness, man. You just more fluidly elevate your level of awareness based on your own personal risk assessment and surroundings.

Expect the unexpected and plan for the impossible man because you never know when you’ll find yourself in a blizzard, a monsoon, a flash flood, an ice storm, a power outage, and lost on the Southside of Chicago all in one day.