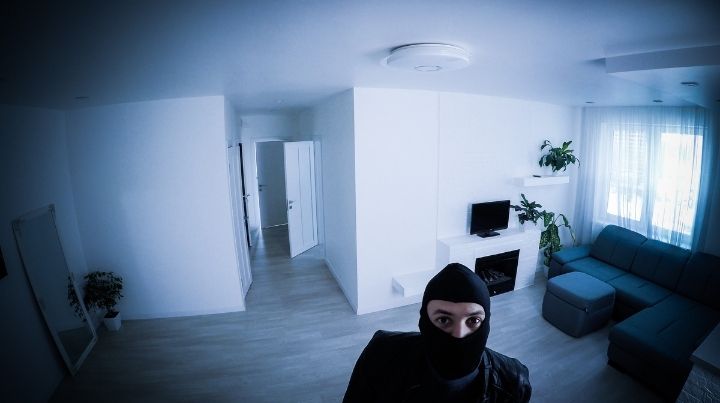 To best understand how to prevent them, you need to answer the question, “What IS a home invasion?” Understanding the home invasion process can help you to improve your strategies for preventing them.

Home invasions target you, your home, and your family and are sadly becoming more common. However, due to a variety of reasons, many of us don’t always take that threat as seriously as we should.

That Was My Situation When My Home Was Robbed in 2010.

My home was burglarized, and here’s a quick rundown of what happened. About a week before I returned from Baghdad in 2010, my roommate emailed me that someone broke into our house. The bad guy found the closet where I kept my gun safe. He then, due to the deadbolt lock that I installed, chopped his way through the door. Once inside, he found my gun safe, loaded with firearms and other personally valuable items. He then worked on the safe, rolling it out the front door.

So, with that in mind, you may understand why I was thinking about the true answer to the question of “What is a home invasion?”

I think it’s vital that we take a look at what a home invasion is. We also need to examine the statistics behind home invasions because it’s the numbers that often motivate some of us to take action. That is taking decisive action to make our lives,  homes, and futures more safe and secure.

Why Merriam Webster’s Definition of “Home Invasion” is Wrong

“The crime of entering a dwelling and committing or with intent to commit a crime (as assault) while armed and while another is lawfully present.” ~Merriam-Webster

Now, some of you may be saying, “Brian, you’re making a very bold statement when you say that Merriam-Webster and its definition of what is a home invasion are wrong.” After all, Merriam-Webster has been defining the English language since 1828! That’s almost 200-years of definitions.

Well, my answer to you is that you’re 100% correct. I am making a bold statement. However, please give me a few minutes to explain why Merriam-Webster’s definition of a home invasion is wrong.

What is a Home Invasion and Why Is Merriam-Webster Wrong? 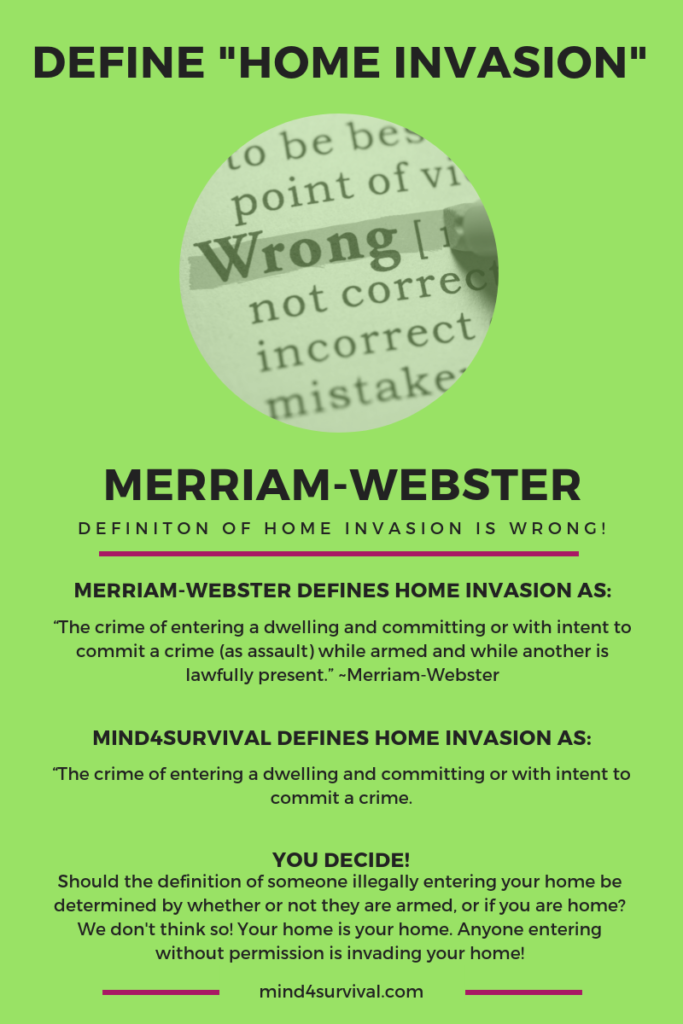 For this purpose, I’m going to assume that we can all agree that Merriam-Webster’s definition of what a home is, is correct.

Next, Merriam-Webster defines “invasion” as “An act of invading. The incoming or spread of something usually hurtful.” Even more to the point, Merriam-Webster’s definition of “invade” is “to conquest or plunder. To encroach upon. To affect injuriously and progressively.”

So, what do all of those definitions mean? Well, if we use the deconstructed portions of Merriam-Webster’s definition of home invasion to create a statement about home invasions, we come up with this definition:

“A home invasion is the act of invading someone’s place of residence, to conquer or plunder and affect injuriously the social unit formed by a family living together.” ~Mind4Survial

This qualifying statement of the definition, in effect, states if someone enters your home with the intent of committing a crime, it is not considered a home invasion as long as they aren’t armed and as long as no one is home. Seriously?

Next, Merriam-Webster seems to base its criteria for a home invasion on the random chance of whether or not someone was home when the bad guy shows up to break in. That makes absolutely no sense. In the end, a bad guy breaking into a home to do bad things is, by Merriam Webster’s definition, invading your home. It’s cut and dry. There shouldn’t be any debate.

The Mind4Survival Definition of Home Invasion

As mentioned before, the true definition of home invasion, based upon Merriam-Webster’s explanations of the words home and invasion, should be less restrictive and without qualifiers. In other words, when a person enters a home with ill intent and without permission, that person is invading the home.

Therefore, to reiterate, the deconstructed version of the Merriam-Webster definition of a home invasion is “The act of invading someone’s place of residence, to conquer or plunder and affect injuriously the social unit formed by a family living together.” In other words, anytime a criminal enters a home for criminal reasons, that person is committing a home invasion.

“The crime of entering a dwelling and committing or with intent to commit a crime.” ~Mind4Survival.

That’s it. There should be nothing else to it. As proposed previously, when a criminal enters a home to commit a crime, armed or not, and regardless of whether anyone is home, that criminal is committing a home invasion. End of discussion. 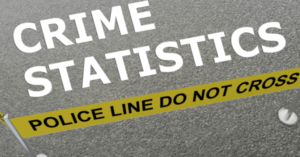 The Department of Justice (DOJ) states during the period from 2003 to 2007, there were over 3.7 million burglarized homes. Remember, the true definition says that a home invasion is anytime a person enters a dwelling with the intent of committing a crime. Therefore, the accurate statistic for home invasions should be 3.7 million home invasions happened over the 2003 to 2007 period.

That stands in stark contrast to the government statistics that 28% of burglaries occurred when someone was home. In other words, according to the DOJ, of the 3.7 million burglaries, only 28% had any chance of consideration as a home invasion. Additionally, in discussing why Merriam Webster’s definition of a home invasion is wrong, we covered the fact that by definition, a criminal must be armed before their crime is considered a home invasion. So, with that definition in mind, it stands to reason that the exact number of Merriam-Webster, definable home invasions, is quite less than the proposed 28% figure.

Property crime, not counting arson, cost victims a combined total of $15.6 billion in 2016. Yes, that is billion, with a “B.” That incredible number does not necessarily account for the potential rise in insurance premiums to the victim and the surrounding area.

When we include insurance rates and other factors, the total cost of property crime to victims and their neighbors is much higher than $15.6 billion. In actuality, the truth is that property crimes do not only impact the direct victim(s) of the crime. The reality is that many organizations and local governments base their decisions and policies on community-wide crime statistics. These statistics have an impact on many areas of life within a community. For example, higher crime rates cause an increase in insurance premiums, the hiring of additional police officers, and many other actions that negatively burden the lawful members of a community. Property crime not only victimizes the people that criminals target, but the secondary repercussions victimize everyone within a community.

Do you know that the majority of home break-ins happen between 10:00 am and 3:00 pm by someone who lives nearby? The sad 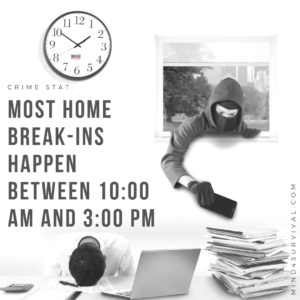 truth is that most home invaders live within two miles of their victims. Unfortunately for their neighbors, criminals find it much easier to target people who live nearby than those who live farther away. By living close, criminals are much better able to determine your pattern of life.

When bad guys learn your patterns, they know many details of your life that that can aid them in planning their crime. These criminals will know schedules, daily routines, security (or lack of security) habits, and other crucial information pieces. They’ll know when, where and how long their victim typically goes to the gym, the store, or for a doctor’s appointment.

When entering homes, nearly 35% of criminals enter through the front door. Next, of those who decide not to come through the front door, 30% choose to go in through a window. In the end, regardless of how bad guys enter a home, they have no problem doing so. When they do, they also have no problem with wrecking the lives of the people who live there.

It makes sense that burglarizing a home takes time. After all, when any of us decide to organize our homes, it seems to take forever.

Reality, though, is far from what we tell ourselves. The fact is that most criminals can break into your home, grab what they’re after, and leave in less than ten minutes. Many bad guys time themselves while burglarizing a house, so they know when to leave. Criminals do this because, just like you, they don’t want to go to prison.

Home invaders use tactics such as timing themselves to act quickly when breaking into a home. One method they use, which can be disturbing to the victim, is to dump everything on the floor. You may have seen photos of the aftermath of a home invasion. If you have, you’ll know that they can be shocking. Home invaders often dump everything on the floor from drawers and boxes. This is so they can quickly see if there is anything of value in whatever they’re looking through. They may flip your bed and turn over sofas or chairs. In the process, they destroy your home in addition to taking what is most important.

One shocking statistic is that criminals who break into your home do not always steal property. In fact, during 55% of home invasions, nothing is taken. However, when a home invasion targets an unoccupied home, 75% result in property loss. So, yes, it’s true that criminals who break into houses don’t always steal from them. However, it is also true that EVERY time criminals break into homes, they do so with the intent to steal. Additionally, EVERY time criminals break into homes, they risk a deadly confrontation with the people who live there.

Have you ever wondered why criminals do what they do? Well, there are many reasons, but one reason is that the odds of getting caught favor the home invader. What, how can that be? It happens because less than 15% of home invasions result in an arrest. That low arrest number means that, generally, the criminals go on and with only a slim chance of capture. 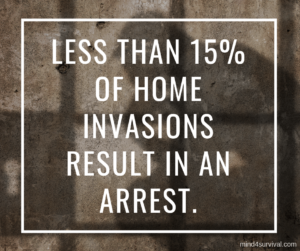 When criminals do commit a home invasion that falls into the 15% resulting in an arrest, they end up in another statistic: how they are charged when caught.

The statistics show that criminals who break into homes fall into one of two groups. Those arrested for breaking into unoccupied homes usually get charged with breaking and entering, and burglary. However, bad guys who break in while someone is home are typically charged with robbery, aggravated assault, rape, kidnapping, or homicide.

With this statistic, it is worth pointing out the difference between the two groups. Sure, the second group usually gets charged with much more severe crimes.

The more noticeable difference is what truly determines the fate of every home invasion. That obvious difference is luck. Yep, it’s nothing more than good old-fashioned luck. So, you may be wondering what that means? What it means is simple. While the home invaders may create well-thought-out plans, they are not able to out plan luck. Therefore, despite their best efforts, luck may dictate that someone comes home early. Perhaps there was a problem at work, so people left early. Maybe the potential victim just decided to go home early.

In the end, the reason for the luck that brings the criminal and potential victim together doesn’t matter. What matters is when the two do meet. When that happens, the charges of robbery, aggravated assault, rape, kidnapping, or homicide become possible. Therefore, it’s critical that people think about, plan, and take actions to prevent becoming victims.

Lastly, as baffling as it is, not all home invasions are considered felonies. However, when the system works and criminals are caught and convicted, jail times vary. For criminals convicted of entering an occupied home, sentences typically range from five to twenty years. On the other hand, criminals arrested for burglarizing unoccupied homes may spend less than a year in jail.

The Bottom Line on Home Invasions

The bottom line on home invasions is that the crime is very common. Learning to think like a criminal can help you look at your home differently and make it a more difficult target for criminals.