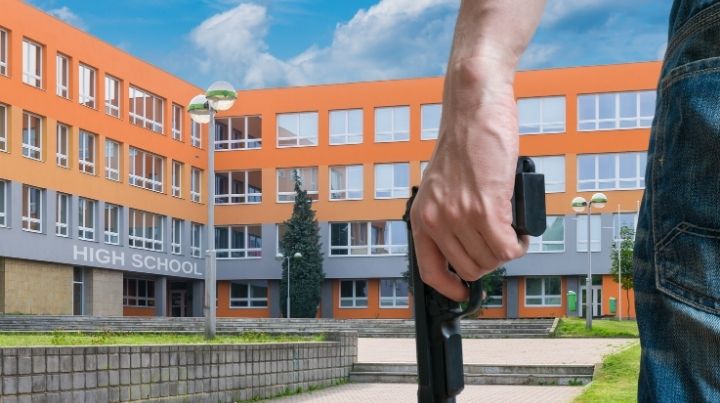 Unfortunately, active shooter-related events are a part of our modern world and are on the rise in the United States.  The media and politicians place salacious focus on firearms. But, they rarely, if ever, mention preparing for an active shooter event so that people know what to do if they are caught up in this nightmare scenario.

All one has to do is read the FBI report on active shootings to understand they can happen anywhere at any time. This increase in active shootings makes it more critical than ever to understand what to do during an active shooter emergency. Not only should you learn this, but as a tragic series of school shooting shows over the past few years, your children should learn it as well.

As a former Army Ranger, firefighter-paramedic, high threat security specialist, and international security director, I’ve spent years training on and dealing with scenarios much like the Florida school shooting and other similar incidents. In addition to my background, I’ve spent decades working alongside Delta Force Operators, Green Berets, Navy SEALS, SWAT team members, and others.

To start with, you should understand that active shooter incidents happen fast. In fact, according to FBI statistics, approximately 36-percent of active shootings are over in less than two minutes, with the majority lasting less than five minutes.

So, what does this mean to you? Unfortunately, it means that once an active shooting starts, you’re probably on your own. That also means you won’t have much time to think your way to safety.

Identify the Problem and Take Action

The first step is to identify the problem. That means understanding what is happening in the world around you. In the military and law enforcement, this is known as situational awarenesss. If you’d like to learn more about situational awareness, you can read up on it in our blog post here.

Once you become aware of the problem, in this case, an active shooting, your next step is to take action. Taking action means just that, T-A-K-I-N-G  A-C-T-I-O-N! In other words, don’t just stand there, do something.

Far too often, when people are confronted with a very stressful situation, they freeze. This often happens because of normalcy bias. Normalcy bias is the thought that a tragic event won’t happen to us. In short, normalcy bias is our brain trying to convince us that everything is alright. Well, in this case, it isn’t, so we need to act.

Many people freeze in a disaster situation.  The ability to break this paralysis is paramount to your survival.

“Freezing” is called “tonic immobility” in behavioral science and it is a biological impulse.  A study exploring the “freeze response” to stressors, describes the reaction…

…In the context of this particular study, the freeze response could be related to an overload of stimuli because of the demands of creating your plan.  By having thought through various situations and getting into the habit of quickly developing plans, you can override your body’s natural desire to “freeze” and you can take definitive, potentially life-saving, action.

In an emergency, hesitation can kill you.

Train Physically and Mentally When Preparing for an Active Shooter

While tonic immobility is a natural physiological response, it doesn’t have to be. You can do a lot to train mentally and physically and override this response.

The best way to make sure you don’t freeze up is by training ahead of time. By at least thinking things through in advance, you’ll be more likely to come out on top of a major tragedy. One way to do this is to think about possible scenarios as you go about your day. For example, what if a bad guy comes out from behind the door? What if an active shooting happens while I’m in the library?

These what-if scenarios are meant to help you react more quickly and effectively when problems happen. They also play into something the military calls the OODA Loop. The OODA Loop, which stands for Observe, Orient, Decide, and Act is a process of taking action. By mentally or physically training yourself ahead of time, you’ll be more prepared to deal with problems when they happen.

We discussed how physical and mental training help prepare you for success during an active shooter incident. So too does taking notice of the developing situation as you go about your day. Remember, we covered situational awareness earlier?

In this case, as you go about your day, you want to take notice of exits. Now, those can be exit doors or pathways that should lead to safety. By maintaining awareness of the exits, you’ll be better able to move towards them if something bad happens. Don’t forget to note exits that are not as easily noticeable, such as backdoors, etc.

Another good thing to remember is planning. Planning is important because it forces you to think about a situation and what-if scenarios.  A good course of action when planning is to include others in your process. Including others creates a dialogue that forces thought and inspiration, and often checks the quality of your plan. Plus, it helps to involve your loved ones and increase their preparedness mindset.

The best way to not get shot is to create time, distance, and space between you and the active shooter. Getting away and escaping from the bad guy should be your number one priority. When the shooting starts, run AWAY from the shooter and towards safety. Don’t stop to pick anything up like your shopping bags. As you run, warn others and help guide them to safety. Guiding people to safety as you are running does not mean stopping and talking about it with them. If others aren’t willing to get moving, that’s their choice. Your best action is to get away from the danger.

If you cannot escape to safety, the next best course of action may be to hide. When hiding, you still want to do your best to create time and distance between you and the active shooter. However, do so as you find and put yourself into a good hiding place out of the shooter’s view. If you can quietly and quickly lock a door to your hiding place, do so. You can also turn out lights if you can do so without attracting attention.

When hiding, it’s vitally important to be as quiet as possible. Make sure your phone is on silent. That includes making sure it won’t vibrate either. At this point, you may want to consider NOT calling the police. Instead, consider texting them. After all, once the shooting starts, the odds are you’ll be on your own until the situation is over. Should the bad guy hear you talking, that may be all it takes for him to locate you.

Lastly, when hiding, you don’t want to move until the police come and get you or give you the all-clear. If you leave before, you may happen upon the active shooter or put yourself in a position where there’s no chance to run or hide. Also, remember, law enforcement officers will have their adrenaline flowing. So, make sure you get down and make it completely obvious to them that you are not a threat. Keep your hands empty and visible, and obey all commands from law enforcement.

Fighting the active shooter should be your last resort. You’ll only want to fight during an active shooting if there are no other alternatives. As I’ve discussed many times, entering into a physical confrontation often leads to trouble for all involved.

Once you decide there are no other options, then you should fight to win. If time permits, recruit others to help you. If you are unarmed, take a quick look around and see what you can use as a weapon. (Although it would be difficult to find an improvised weapon that tops this guy who stopped a killer with a Narwhal tusk.)

Then, once you’re ready, attack the active shooter with speed and violence of action. Remember, the active shooter has a gun. Therefore, this is no time for halfhearted measures. When the time comes to fight, you will be best served by exerting the maximum damage possible in the shortest amount of time possible.

Should your efforts to overcome the shooter be successful, immediately kick (not pick up) the gun away. Then, while making sure the bad guy stays subdued and down, make yourself as non-threatening as possible. After all, you don’t want to be mistaken for the bad guy after you already took him down. Just think about all the parties and late-night TV shows you’ll miss!

The Bottom Line on Preparing for an Active Shooter

A great way of preparing for an active shooter is to learn more about events that have already happened. An excellent resource for this is Greg Ellifritz’s website, Active Response Training. Greg is a retired cop and has spent years studying active shooter events and has written dozens of articles breaking down each situation. You can check out his active shooter archive here.

The more you learn about the possibilities and the trends, the better prepared you will be.